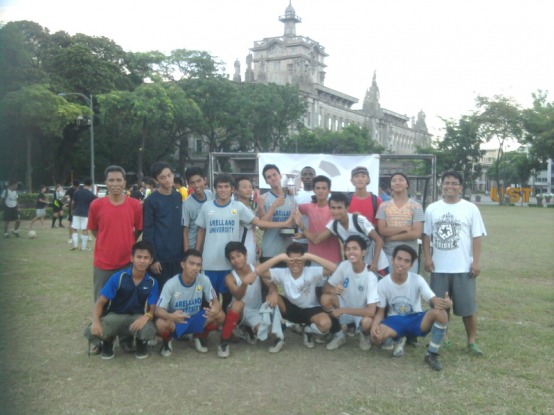 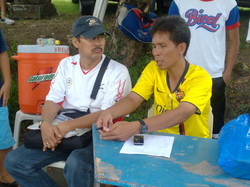 President Tito Clement and Coach Rav
Pastor Tito Clemente is the President of Butuan Agusan Norte Football Association. He is a Pastor and an educator and supports various teams such as Dolphins United whose currently competing in United Football League. He was the former Athletic Director for the multi-titled PCU Dolphins team.

He is a former governor of the Philippine Football Federation. He had been all over the country to promote football in the grassroots level.

He graced the awarding ceremony and the Championship Match of the 2010 u-17 Youth Football League.

FLAME UNITED FOOTBALL CLUB (FUFC) UNVEILS ITS NEW LOGO IN PREPARATION FOR THE PARTICIPATION IN 2012-2013 PFF SMART NATIONAL CLUB CHAMPIONSHIP. CONGRATULATIONS TO FUFC FOR CAPTURING THE CHAMPIONSHIP TITLE IN THE PROVINCIAL ELIMINATION.

CAFA  IN THE NEWS 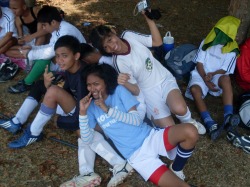 2012 YOUTH FOOTBALL LEAGUE, DEVELOPING SCHOOLS TO BE TITANS OF THE SPORT

Molino, Bacoor - The 2012 17U Youth Football league opened last September 2012. With the perennial participants parading their colors, once again, CAFA made a statement and prove that YFL is now a vital part team or school development. Philippine Christian University - Dasmarinas, University of Perpetual Help - Molino, University of Perpetual Help - Las Pinas, and the defending Arellano University once again play with each other in as many years as the YFL existed and this time the Arellano Chiefs has to defend their crown against the counterparts who already have develop their teams overtime. YFL is aimed in preparing High School teams to tough battles in NCAA and NCAA South.

The unique format of the CAFA Girls Football League Festival produced one of the most heart pounding tie breaker as three teams end up with similar 50 points each to emerge as champions of each of the three leg football grand prix.

LaSalle Lipa got the highest goal total that made them the team to wait to the down the wire penalty break. A miss by GOM pushed Army-Victory to a showdown with LaSalle-Lipa for the crown but the younger Army-Victory team succumbed to  the more experienced LaSalle Lipa.  It was a sweet win for LaSalle-Lipa for finally claiming the championship crown after a runner-up finish last season.

Molino, Bacoor - Arellano University dumped D'Cup FC to end the CAFA Football Season with 17&Under Football Fiesta For Youth Crown last December 20, 2009. It was an intense battle for supremacy but the experieced striker Alvin Obero scored at the 18th minute to seal the win 2 - 1 for the Legarda based varsity team. Later, Alvin Obero was declared the MVP of the tournament. Meanwhile, the undermanned Flame United FC copped the third place against the dasmarinas based varsity team of Philippine Christian University. Both team defense was so tight that the game ended in a draw and was settled on penalty kicks with Goal Keeper Perry Camba showcased once again his proven  indepth goal keeping skills foiling three of five attemps by the PCU booters. CAFA once again ended the year with a successful unique tournament to promote football in the Province of Cavite.

UPHR, Molino, Bacoor Cavite - RBRLaw/Flame UTD FC defeated D'Cup FC in a rematch of U17 CAFA Youth Football League Finals to achieve a rare Grand Slam ruling the first three seasons of the league. D'Cup FC, the league leader came in strong with a goal from midfielder Adam Dublon in the 25th minute of the first half. But  RBRLaw/Flame United FC regrouped in the second half with a merciless defense  and persistent offensive plays to score two goals in the second half. RBRLaw/Flame UTD's star forward Matthew Asong made the first of their 2 goals in the 18th minute of the second half and  followed by a long shot by winger Darwin Dacanay in the final 22nd minute to successfully defend the crown finishing the game at a score of 2 - 1. Three RBRLaw/Flame United FC players went home with major awards. Midfielder John Miguel Gomez was adjudged the MVP of the tournament, Goalkeeper Perry Camba, Jr. as the Best Goalie, and Right Winger Darwin Dacanay as the Best Defensive Player. Midfielder Adam Dublon of D’Cup FC was the tournaments Best Midfielder and Forward Alvin Obero of Arellano University was declared the best striker being the player with most goals scored in the 2 month long tournament which started last August 1 and had its finals game yesterday October 11, 2009.Meanwhile, University of Perpetual Help System Dalta – Molino overwhelmed Arellano University for the third place at 1 – 0 score.On the distaff side, Nomads FC defeated Flame UTD 2-1 and UPHSD-Molino 3 - 0 to rule 2 of 3 legs of the Grand Prix Womens Football League and snatched the Grand Championship Crown from DeLaSalle University - Lipa who ruled the first leg and came in runners up in the next two legs to narrowly miss the crown. Flame United came in third and UPHSD, fourth in the standing. Nomads Players garnered all the individual awards. Earlier, Nomads FC topped the born 97 category with UPHSD-Las Pinas as the runner-up. UPHSD-Molino and PCU-D came in 3rd and 4th respectively. The highly successful 2009 edition of CAFA Youth Football League was supported by Herbalife, Nokia, and RBR Law Firm.

D-CUP FC crushed UPHR-MOLINO FOOTBALL VARSITY 6-1 to be the first team to enter the championship round of the 3rd CAFA Youth Football League. UPHR-Molino was poised to win the game earning the first goal but it was a wake up call for the No.1 Rank team D'Cup FC as they rallied to a 6 to nothing run to win the game.

In the second semi-final game, experience proved to be the biggest weapon of the defending champions FLAME UNITED FC as they cruised to their sixth straight win of the tournament beating the mighty ARELLANO UNIVERSITY VARSITY 3 - 2 to defend their crown against the same opponent the beat last season. Veteran Goal keeper Jojo Camba frustrated AU strikers with four straight interceptions of whatever offensive kicked in against the keeper. Another veteran striker JB Misa has proven once again that he is one of the marked man in this league as he scored the last 2 goals to seal the final seat for FLAME UTD.

Defending Champions Flame United FC thrashed University of Perpetual Help Rizal - Molino (UPHR-Molino) 5 - 3 on the last playing day of the eliminaion round to enter the semi final round at rank number 3. Flame United FC will face the mighty Arellano University in the semis. Philippine Christian University - Dasmarinas (PCU-Dasma) meantime blew their chance to enter the semis as they drew with UPHR - Las Pinas 2 -2 virtually bidding goodbye giving the free ride to UPHR - Molino in the semis. UPHR - Molino will face the number 1 ranked D'Cup FC at the other semifinal game to be held on September 20, 2009. Winners of the semis will then square off for the championship on September 27 with the losers fighting it out for the 3rd place.


2009 YFL: ARELLANO UNIVERSITY DEBUTS WITH A WIN OVER UPHR-MOLINO

Bacoor, Cavite - Cavite Football Association formally opened the 3rd Youth Football League on August 1, 2009 at University of Perpetual Help Rizal - Molino (UPHR-Molino) Campus. The Nine week 11-a-side official football tournament will be a single round elimination with top four advancing to the semifinals and winners of semis will vie for the championship trophy. On the first game, D'Cup FC drubbed the defending Champions Flame United FC via a 4-2 win. It was a tight game until the final quarter of the game when D'Cup FC's superior offernse breaking through the inferior defense of Flame United FC. In the second game, Arellano University Varsity showed lots of potentials in its inaugural game earning a classy win over the host team University of Perpetual Help Rizal - Molino Campus 3 - 1. UPHR-Molino's goal on the 9th minute gave them the lead on the first half but it was all Arellano University show as they outscored UPHR-Molino until the end of the game.

Dasmarinas, Cavite - As Cavite Football Association (CAFA) continued its second phase of its Annual CAFA Cup, Flame United Boys B92 blanked D'Cup Team to raise the championship trophy. In the distaff side, it was a double celebration for the Flame United Football Club as their womens open counterpart dominated their side of championship. Meanwhile, PCU-Alumni won over Army Team to be crowned as champions of the Men's Open. The successful Tournament was able supported by PCU-Dasmarinas as the tournament host.


Bacoor, Cavite (UPHR-Molino Football Field) - Flame United captured its second straight championships of the four leg 7-a-side Grand Prix Festival last July 29, 2007 by winning over GLI Calciatori in as many games the two teams met. On the other side, PCU-Dasmarinas (PCU-D) made an exact revenge over Saint Vincent De Paul College (SVDPC) as they finally won over the later in their second championship match-up played August 4, 2007. Both PCU-D and SVDPC have simillar tally to lead the Born 95 category with 40 points apeice. On the distaff side, Flame UTD now widen its lead over Gli Calciatori with 50 points against 30 points of Calciatorians.

For the 11-a-side YFL Tournament which will run from July to August, 2007, all participating teams will play against each other in a single round robin elimation. Top four teams will advance to the semi-finals with the fixtures: Rank 1 vs. rank 4 and rank 2 vs. Rank 3. The ranking is determined by the total points earned by each team. A win is 3 poitns, draw is 1 point, and zero for a loss.

PCU-Dasma trounced UPHR 5-1 to win its first game on the High School Boys 11-a-side while D’Cup FC blanked Amadeo FA 9-0 to win the 2nd game of the tournament.


On the 7-a-side WFL and YFL grand prix four leg tournament, all participating teams will play against each other in a single round robin each leg. A win is 3 match points, draw is 1 point, and a loss is 0 match point. Each ranking will have an equivalent leg points. At the end of the four leg tournament, that team with highest accumulated number of leg points will be declared the Grand Champion. Flame United FC  Womens Team beat GLI Calciatori FC to win the first leg of the women’s division while Saint Vincent de Paul College won over PCU – Dasmarinas to claim title on the born 95 boys division. Both winners now have 25 points to lead the leader board.

The Festival were participated in by different teams from schools, football clubs, and associations from Calabarzon and Manila. The winners from different categories were as follows: 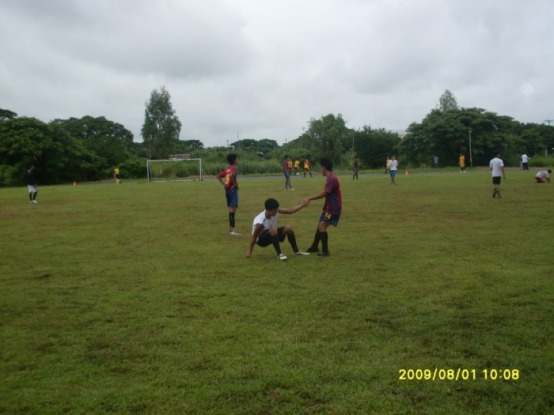