FOOTBALL IN THE PHILIPPINES

Football (Soccer) as a sport has been in the Philippines since the beginning of 20th century brought in by western colonizer. Mr. John Cleland an Ilo-Ilo born Englishman help in the propagation of the sport in the country. Philippines have been a strong contender in regional competitions in the 40’s till early 70’s, but then its strength and popularity has declined then. Established in 1907, Philippine Football Federation (PFF) was then tasked to revive the life of the sport as it was overtaken by other sports such as basketball, billiards, bowling, boxing, and even volleyball. PFF is an organized federation of associations all over the Philippines. It is the sole authority that gives mandate to each association to conduct its own programs with in their boundaries and territory. Associations were recognized in a territorial scope most of which are provincial or regional. PFF has been successful with this kind of set-up. As football flourished in Metro Manila, its popularity in nearby provinces still dwindles, though lots of talents in the National Capital Region comes from the nearby provinces like Cavite, Batangas, Rizal, Laguna, and Bulacan.

Cavite is the one of the nearest province in NCR, yet the absence of good football program stagnate the growth of football. Cavite potential is so huge, being one of the most industrialized province in the country, it boost itself with the highest growth in economy and population. It has 578 pre-elementary schools, 800 elementary schools, 284 secondary schools, 49 colleges and universities offering tertiary education and 111 vocational/technical schools operating all over the province. It’s always been a strong contender in Football in regional meets but its successes always fall short of its objective due to absence of an organization to look into its programs and monitor the implementation of the program. Several attempts of promoting the “Kasibulan Program” through DepED but lack of support basically stunted the growth of the Program.

With immense potential waiting to be tapped, a group of people thought of pushing the growth of Cavite Football forward and make it as Cavite’s third revolution. With a population composed of almost 30% age 15 and below and 60% aged 16 to 60; this population samples are the perfect target for football to penetrate. The need of a good program is colossal; therefore it is urgent that a new football association must be launched immediately to fill in the void in Cavite Football.

EMERGENCE OF A NEW FORCE

A group of football coaches in the Province of Cavite signified its intentions to establish a football association that will spearhead in the development of football as a sport in Cavite. Through the efforts of Coaches Angelita Servillon and Shiela Tabancora, they were the forefront in informing the Philippine Football Federation (PFF) that a new football association in Cavite has emerged. PFF positively responded to the calling and sent Mr. Joaquin Preysler to witness the creation of new group by which then PFF Secretary General Pablito Araneta lead the induction of the new officers. With new association enjoying its Cinderella season, a dynamic troika of Philippine football greats and a corporate executive made a pact of revolutionizing Cavite football. Their mission is to develop football to the Cavite grassroots, and true enough to their words; they were the prime movers in establishing the newest Football Association under PFF. Mr. Segundo B. Saluria II, Mr. Ravelo B. Saluria and Ms. Angelita A. Servillon, all football greats of the country being a player, coach, referee, organizer, etc. and Engr. Perry Camba, a civic oriented corporate executive were the people that made possible to the birth of Cavite Football Association. It was supported by Provincial and local government, Dep Ed, Private Schools, Football Clubs, and most specially the community. Immediately upon its inception last December 2006, CAFA launched its first grassroots program hosting its 1st CAFA Football Festival where 35 teams participated in 7 categories (age groups) last January 20 – 21, 2007. It was followed up by 2nd UPHR-Molino Cup participated mostly by the same original member team last April 20, 2007. The Association is now one of the most active among PFF applicants as it also sent teams to participate to other tournaments in nearby provinces. As years passed by, CAFA now hosts between 12 to 14 tournament annually and has been sending referees to big leagues such as United Football League (UFL) and Ang Liga.

To legitimize the football as a sport and as a ballgame, CAFA designed a mid season program where participating teams got to compete in a league type tournament. This paved the way to the launching of Women’s Football League (WFL) and Youth Football League (YFL). The said Leagues are designed for an 11 a-side type tournament coupled with a Festival-type 4-leg grand prix tournament. The first phase of the program will be from July to August, and the Second Phase of the program is from January to March the following year. To open CAFA season, CAFA Cup serves as the gate to CAFA football year and end with the CAFA Soccer Fiesta for Youth. In between, CAFA will have a separate program for FUTSAL and BEACH SOCCER. The said program is aimed to produce at least a representative in Philippine National Team training pool. In 2011, there were three (3) CAFA players who were chosen to Under 19 National Team, and one (1) in girls national team, that highlighted the result of the program set by CAFA in 2006.The launching of these Soccer (S) Leagues was beefed up by a separate training program for referee. Mr. Ravelo B. Saluria, a FIFA international referee veteran made the training possible. There were seven additional referees added to the referee’s pool of the association raring to go into action. Currently there are 14 referees in CAFA Referees Pool. The goal is to have at least 30 legitimate referees in the pool to complements its whole year program. In 2012, CAFA had a referees refreshers course tha paved way for CAFA referees to have UFL assignments. Currently, there are four (4) regular tournaments from sponsors and member organizations tha CAFA is hosting namely UPHR Cup, SVDPC Cup, Lion’s Cup and Cherifer Cup.

CAFA hosted summer football clinics through its original founding member Philippine Christian University – Dasmarinas and University of Perpetual Help – Molino Campus. General Trias Football Club had their separate summer clinic too. Its aim is to introduce football to kids from awareness age to 17 years of age and above. There are several training modules for each age category. A trainers training program will be launched. There will also be seminars for the executive team of the CAFA. They shall be sent in seminars to enhance their management, leadership, and inter-personal skills.

CAFA has partnered with World Wildlife and Eco-Registry Foundation, Inc. (WWERFI) to help in its green campaign. With WWERFI's slogan "Crossing the Green Line", CAFA is now on a level up mode campaigning for environmental protection. CAFA will be campaigning WWERFI's pro-environment program in all its tournaments and activities.

The Cavite Football Association shall have three (3) types of members: regular, probationary and associate (type of members may vary but ideally should undergo a probationary stage before becoming a regular)

1. Regular Members -are those organizations that have been accepted as such after having met the requirements and qualifications prescribed hereunder. They have the right to representation and the right to vote in all CAFA General Assemblies, as hereunder provide. Only an absolute majority of the voting members of the General Assembly may approve regular membership upon recommendation of the CAFA Board.  No applicant may become a regular member unless it has gone through a probationary period of at least one (1) year.

2. Probationary Members- are those organizations whose application for membership have been accepted by CAFA President upon recommendation of the CAFA Membership Committee, but have not yet fully met the requirements and qualifications for regular membership. They may be represented in the General Assembly while on probationary status but have no right to vote.

3. Associate Members -are corporations, institutions, organizations or individuals who contribute time, effort and financial assistance to the advances of the causes of which the CAFA exists. They may attend or be represented in the General Assembly as observers but have no right to vote. Acceptance of applications for associate membership shall be at the discretion of the CAFA President upon recommendation of CAFA Membership Committee.

COMPOSITION OF THE BOARD 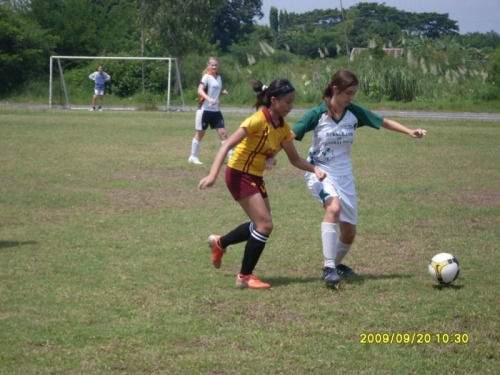 Nomads and UPHR-Molino in Action at 2009 WFL